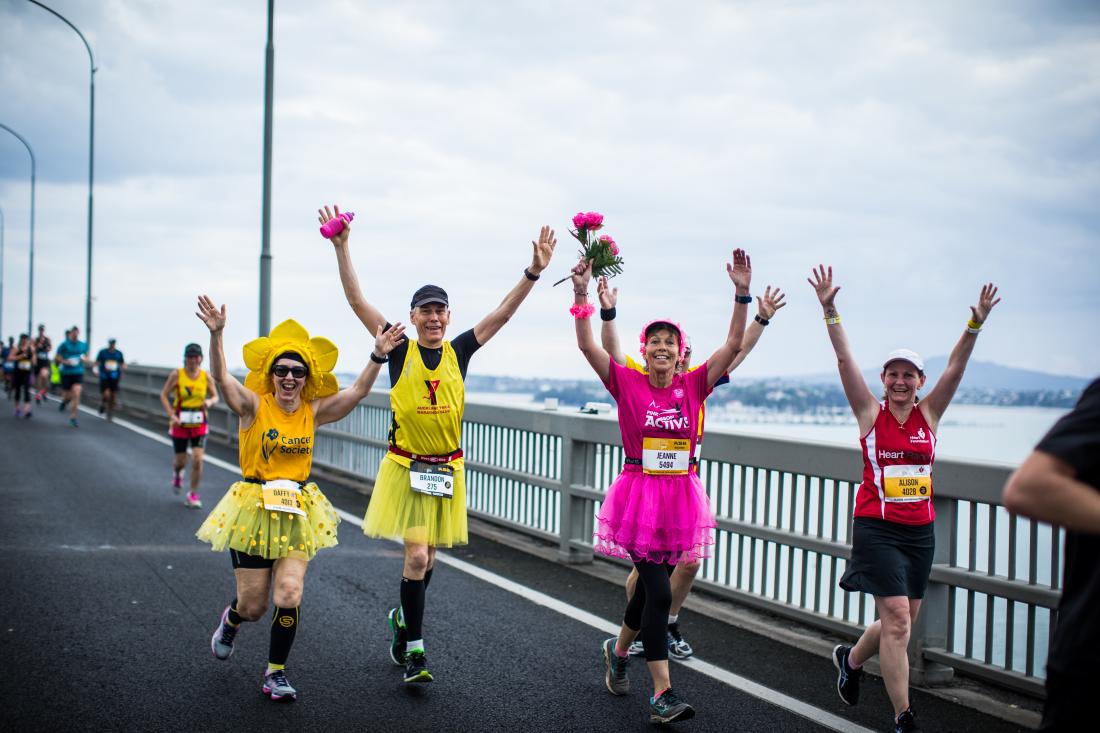 Close to 15,000 participants from an incredible 54 countries are expected to line up across four events at the ASB Auckland Marathon on Sunday October 20, bringing with them thousands of stories of inspiration and dedication, many relating to the 13 official charities in the ASB Charity Hero Programme that aims to raise one million dollars for the community.

Race Director Adam McDonald says that organisers are focused on looking after each and every participant and recognising everyone’s efforts as inspirational.

“We are proud of everyone that takes part in the ASB Auckland Marathon this coming weekend, whether you are one of the leading runners looking for a podium and fast time, or a weekend warrior with your own goals, or a debutant who right now is wondering what you are in for! We think you are all amazing,” said McDonald.

“To the many that have gone the extra mile and registered with our ASB Charity Hero Programme and are raising money for one of our 13 worthy charities, thank you from the bottom of our hearts. Your efforts have likely already inspired family and friends but most important is your role in leaving a legacy in the community by helping these charities continue their incredible work long after the race is over for another year.”

The ASB Charity Hero Programme enables runners to register and fundraise for their choice of 13 official charities (see charities below), encouraging awareness and raising funds through their efforts before and during the event.

Among those to sign up are Rio Olympic Games silver medal winning sailor Alex Maloney, raising awareness and money for The Mental Health Foundation.

“In an ideal world, it would be great to lower all the horrible statistics on mental health in New Zealand, and give more people access to support. I think it would be really cool, if New Zealand can turn the statistics around, help people not only survive and get by, but thrive,” said Maloney.

“I think it’s obviously a big task with root causes being so individualistic, but it’s one New Zealand must take on, if we can raise a few thousand for Mental Health in New Zealand on the back of me running a half marathon, that will be fantastic!”

One of the official ASB Charity Hero partners is KidsCan and on top of the money athletes raise, ASB is donating a KidsCan hot meal (delivered into schools) on behalf of every participant who crosses the finish line on Sunday.

KidsCan Volunteer Co-ordinator Howard Gilbert is running the John West 11k Traverse for KidsCan and knows better than most the difference they make in our communities.

"I’m using an old pair of running shoes that have done over 500km of training and races. They're falling apart a bit. I’m using them to highlight the fact that plenty of kids go to school each day with inadequate footwear, with holes in them. If it rains, the water goes through.

If it gets tough, I'll draw on the fact that I had an upbringing where I had everything that I needed. If I need a new pair of shoes now”, I can go and buy them. There’s plenty of kids that can’t do that."

“I’ve been involved in giving new KidsCan shoes out to kids and I’ve seen the shoes that get traded in and they’re in a fairly bad state. Their new ones are met with beaming smiles.

“Furthermore, I think it's great that ASB are donating a KidsCan hot meal for everyone who crosses the finish line. It's a chance to make a massive contribution to others."

In other stories, Auckland’s Andy Harper is amongst the long service brigade, taking part in his 18th ASB Auckland Marathon but incredibly also bringing up the magical 100 mark in his marathon resume, with number 99 successfully ticked off in Chicago earlier this year.

Robert Scott (Bucklands Beach) might have claim to the most ASB Auckland Marathons but at the very least must surely be leading in the consecutive appearance stakes. The 54-year-old has not missed an event since it first went over the Harbour Bridge and on Sunday will clock up Auckland Marathon finish number 26!

Dianne Hill (Point Chevalier) is equally proud of her record in the Barfoot & Thompson Half Marathon and on Sunday will bring up her 70th half marathon in total, in her 26th appearance in Auckland.

All runners will assemble at their various start lines early on Saturday morning, with the wheelchair marathon the first event to get underway at 5:55am on Devonport’s King Edward Parade.