FORMER US SOLDIER RUNNING AS CHARITY HERO FOR BREAST CANCER 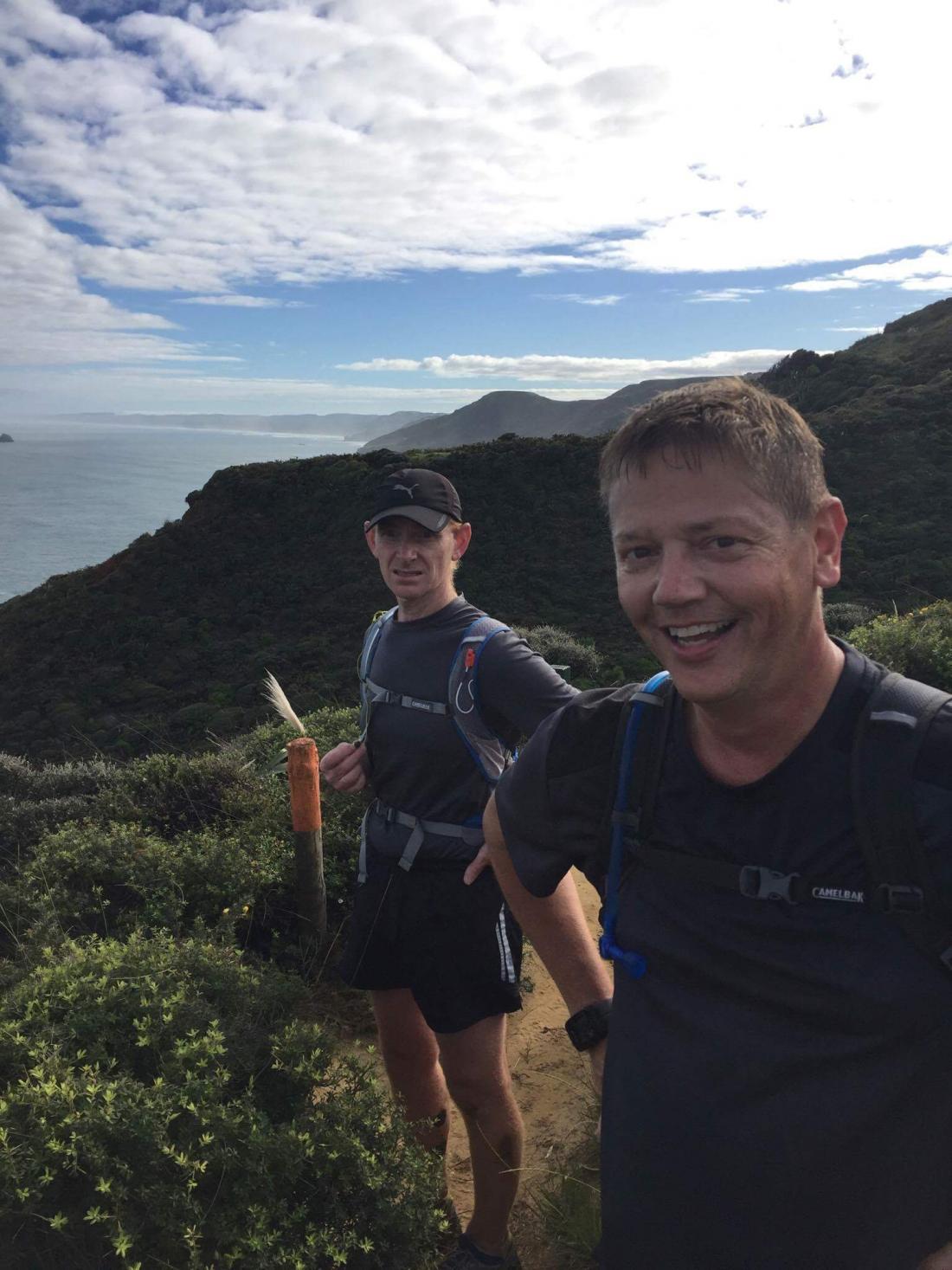 It is a case of third time lucky for Titirang resident Jimmy McCrillis as he contemplates participating in the ASB Auckland Marathon later this month. With two false starts under his belt, the ‘American Kiwi’ has prepared carefully for this year’s event to make sure he gets safely to the start line on Sunday October 29.

“I am now 53 and have never run a marathon. I am not a Kiwi (yet), my wife is (from Blenheim) and our four year old son is a Kiwi but American born, and we have lived in Auckland since March 2015. I had planned to run the ASB Auckland half-marathon that year, I wanted to run over the bridge. But I tweaked my knee fairly seriously and couldn't put the kilometres into training.

“Last year, I broke a rib (or two) falling off a log during a run about six months prior to the marathon. That, and my still-ailing knee kept me out again. I babied my knee as best I could and it is now probably in the 90% or so readiness state. I still ensure that when I hop onto or off a footpath, rock, ledge, etc. I put the majority of the force on my ‘good’ knee.”

McCrillis is further motivated to make it to the event and the finish line this year as he raises money for a cause close to his heart, and sadly one that has been far too close to his family through the years. The New Zealand Breast Cancer Foundation is one of the event’s official ASB Marathon Charity Hero partners.

“I was fairly young when my grandmother went through her breast cancer battle, one that I am glad to say she survived. It was probably in the mid to late 1970s. I just recall that she spent some time in the hospital and we were asked to not hug her much for a while afterwards.

“A number of years later, my aunt Judy went through her fight. Medical care was a bit better, but surgery was again required. She survived and anytime I go back to Ohio, I make sure I find time to have lunch with Aunty Judy. Growing up, I spent more time with her children up than any other relatives. At one time, they lived around the corner from us.

“Then to my father. He was a mailman for about 30 years. After my younger sister finally went off to University, my parents moved to another State, then another, and on, and on. But, about six or so years ago, my father felt a lump. He figured it was breast cancer. But he didn't seek medical care. Pride, embarrassment, invincibility, denial? Who knows? This went on for a year or so.

“My parents then moved to North Carolina, near my older sister. He finally sought medical care and his suspicion was confirmed. He went through more than a year of treatment. The treatment nearly killed him. As a former postie, he loved to walk. He would take his dog for a walk every morning and evening. He also took many bike rides for exercise. That was taken away from him during his treatment. He went through many months of treatment and surgery. I was overseas at the time. I have been away from the US, aside from occasional trips since 2006.

“Incredibly he too survived and kept his sense of humour intact and spirits up throughout. At one point, a nurse asked him if he had any questions. His response was that he wanted to know when his nipple would grow back. The nurse referred him to the doctor. Down but not out, my father.”

Jimmy admits that the Barfoot & Thompson Half Marathon looked quite appealing as a race option, but it was a desire to raise as much money as he can for Breast Cancer that saw him tick the box for the full ASB Marathon.

“I was going to sign-up for the half-marathon so that I could at least run over the bridge. I need to complete the trifecta: Drive it, jump it, run it. So, why a marathon and not the half? Two reasons. With my injuries and getting older, I may not be able to run a marathon in another year or two years, and I want to run at least one. The other is to raise as much as I can for breast cancer awareness. I assume that people would be more willing to donate to the foundation on my behalf if I run a full marathon more so than a half.”

This former American soldier married to a Kiwi from Blenheim and now living in Auckland has found his niche in his new country and mixes the serious with the fun, spending much of his training time with his ‘hasher’ running – or should that be ‘drinking’ friends.

“Hashing is, in its simplest definition, a drinking club with a running problem. We run for about an hour a week (some groups are monthly). We then sing immature songs, make fun of each other, drink beer (in strict moderation), and enjoy a meal.”

McCrillis will also be running with the memory of his mother in his heart, after she passed away earlier this year after falling on hard times.

“My mother was killed on 28 Feb crossing the street in Memphis, Tennessee. She and my father had been separated for several months and she was living in a women's shelter as she battled mental health issues. The only upside to a tragic event was that I got to see my two sisters, my father, my four children in the US (from a previous marriage) and eight of my nine grandchildren. I hadn't been in the US for nearly two and a half years. I had been living in Afghanistan then Dubai prior to moving to New Zealand with my wife.”

Jimmy has successfully completed the Glen Eden 10 Miler and the Devonport Half Marathon in his preparation and is on target for a good day on October 29.