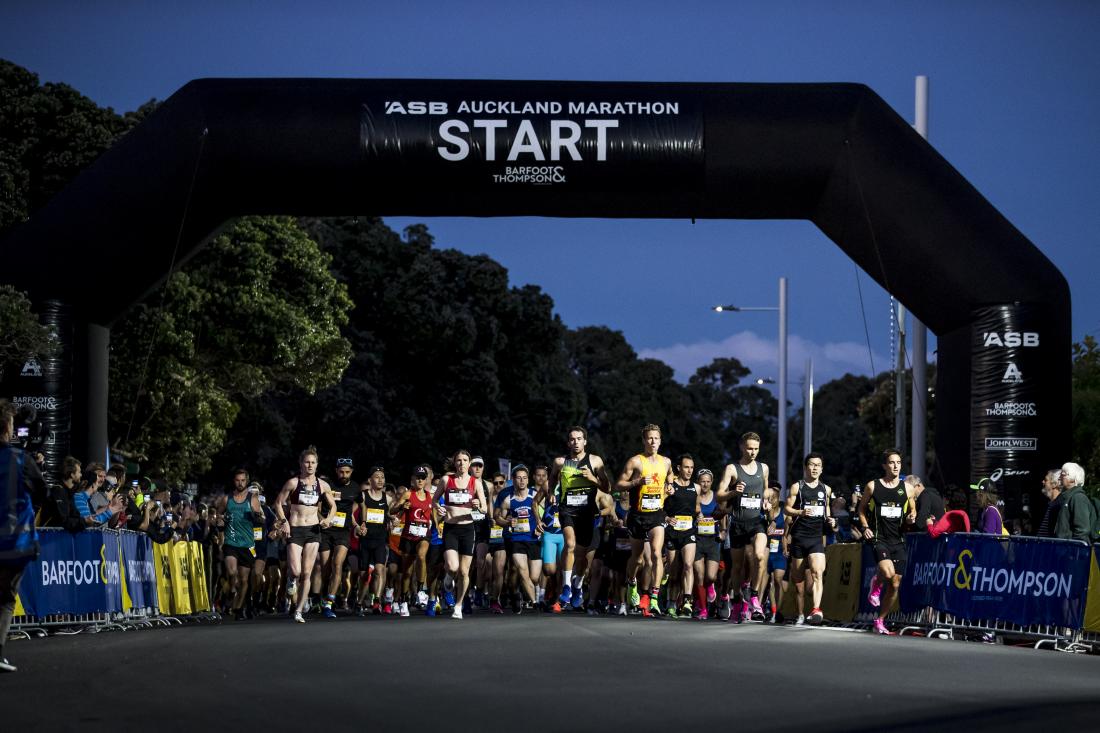 Conditions dawned near perfect this morning for the 2020 ASB Auckland Marathon, with still and warm weather greeting close to 14,000 participants with the wheelchair categories first to head away from Devonport at 5:55am, followed five minutes later by the ASB Marathon competitors.

In a year without precedent around the globe, this was a day of celebration as thousands of Kiwis took to the Auckland streets in the five different races on offer, with young and old, fast and not so fast running it their way, many as part of the Charity Superstar Programme raising hundreds of thousands of dollars along the way, with many delighting in the chance to run across the Auckland Harbour Bridge.

Daniel Jones (Wellington) capped off that ‘interesting’ year to win for the first time in Auckland. The 30-year-old headed to Kenya earlier this year for a five-week training camp which thanks to the global pandemic turned into a five month stay at altitude. The Wellington Scottish runner put that work to good use today as he broke first Michael Voss (Rotorua) and then Fabe Downs (Auckland) to win by almost five minutes.

Jones finished runner-up at the ASB Auckland Marathon in 2018 and was delighted to go one better today.

“It is a pity we don’t have the Aussies and other internationals here – for obvious reasons, but it is amazing to come back from that second place and get that win, it is pretty sweet,” said Jones.

“Obviously we are one of the lucky countries where racing is underway, it is awesome to see so many people out here taking advantage of that, it is an awesome turnout, I think I can speak on behalf of everyone when I say it is just good to be breathing hard again!”

Jones has not specifically prepared for the full marathon distance, making his performance all the more admirable.

“I have been doing a bit of shorter distance training with some shorter races over the past month, it was Michael and Fabe and I having a good battle over the first 15 to 20k, there were a few spurts here and there and then it was basically whoever could hold on, and I maintained that pace a little bit better.”

2020 Round the Bays winner Downs finished strongly to hold on to second place while Hiro Tanimoto (Wellington/Japan) repeated his 2016 effort in finishing third ahead of a tiring Voss.

In the women’s marathon three-time defending New Zealand champion Alice Mason made no race of it, settling into a strong rhythm amongst the men and going through the 10k mark in tenth overall.

The Bay of Plenty athlete found herself all alone throughout the 42km distance.

“Today was okay, I was by myself pretty much the whole way which got a bit lonely, but it was alright. I had to run by feel I guess, keeping some other runners in sight and I managed to see my coach Craig Kirkwood and my partner showing up in a few places on their bikes which was good,” said Mason before reflecting on her first experience on the course.

“I haven’t raced here before, the first 15 or 16k is undulating, but after that it was pretty nice running.”

In the Barfoot & Thompson Half Marathon it was Tokyo bound Olympian Camille Buscomb (Cambridge) who took out the women’s race while Cameron Graves (Auckland) smashed his way to a new race record of 1:05:24 in winning the men’s.

Graves was delighted to finally win an event he has targeted for a few years now.

“It has been a long time coming, I have targeted this for the last 7 or 8 months, it is my fifth time racing and this year I knew I had to go for gold and I went out quick and managed to hold on up and over the bridge and get that record, I am stoked.

“This course is pretty hilly early on, so you have to go out tough but not overdo it. Those first 5 or 10k just roll over the hills but when you hit the motorway on the flat that is when you have to throw it down and give it all you got, those tactics worked well for me.”

For Buscomb victory in Auckland is some consolation in a year of disruption, the Cambridge athlete has qualified for the 5,000 and 10,000m track events in Tokyo and was just happy to be out racing today.

“It is really awesome to be out here racing, that is actually two minutes faster than I have ever run so I am really happy even though I was gunning for the record. Sometimes your GPS is not exactly the same as race timing, I knew it was going to be close though, I was kind of on pace but I knew it was touch and go going into the final two kilometres,” said Buscomb.

With a third over victory the half distance in Auckland under her belt, the 30 year old hopes the Tokyo Games can replicate today and go ahead as planned in July next year.

“July next year is my goal in the 5 and 10k on the track, the delay this year has been pretty strange, but it is great to know the Games will go ahead next year.”

Buscomb described conditions that in the end proved challenging as the temperatures warmed up on course.

“It was quite warm and sunny and not a lot of shade on the course. It was almost a headwind a decent part of the way, so it was windy and hot – so I just told myself to relax and try and run fast. I tried to stick to the pace I wanted, I found that tough, but I always set myself a hard challenge and going for that record did that today.”

First to cross the line on the day was Jonno Nelson in the Handcycle category of the wheelchair race, the Timaru athlete almost literally flew across the course in a time of 1:21:58, the 2020 NZ Handcycle Champion was delighted with his first effort at the ASB Auckland Marathon.

“It was pretty calm, yesterday was windy but today was a lot calmer and faster and a very enjoyable ride. I went solo the whole way. I didn’t have a look coming down the bridge, I was just going as fast as I could. The last 15k was so enjoyable cruising along and 37k an hour, it was awesome.”