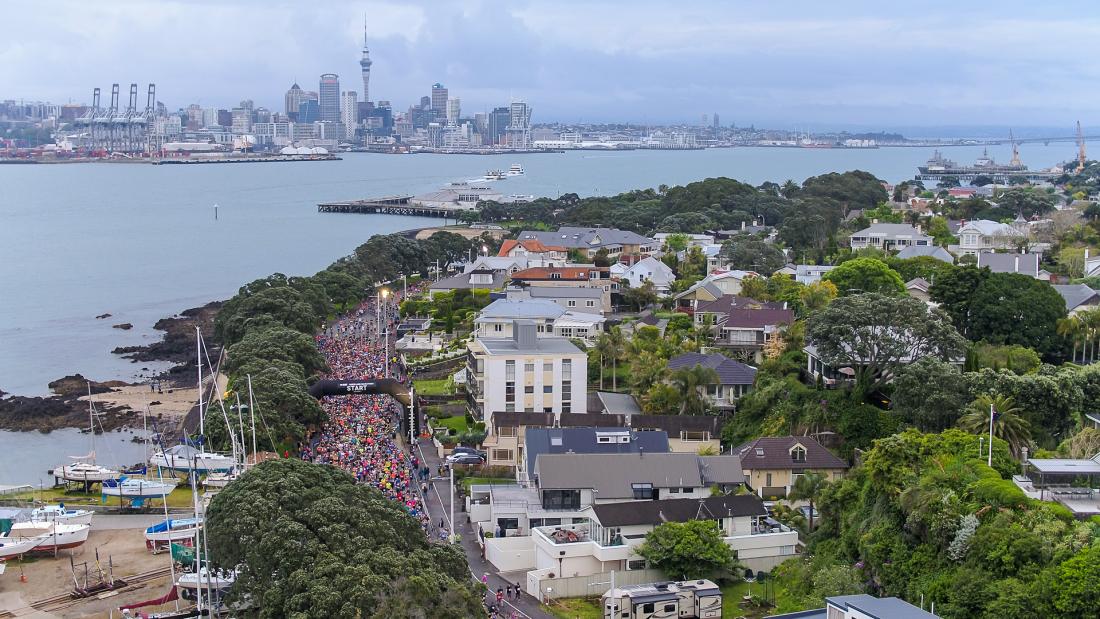 Over 15,000 runners (final numbers to be confirmed after 5pm Saturday), walkers and (for the first time) wheelchair athletes of all ages and abilities will line up across the five events on offer at the ASB Auckland Marathon on Sunday morning, as the popular event takes participants in the John West 12km Traverse, Barfoot & Thompson Half and the ASB Marathon from Devonport over the Harbour Bridge, along the Auckland waterfront and back to the finish line at Victoria Park. The new Fitbit Family 5km course follows Tamaki Drive to Victoria Park.

Runners from as far afield as Great Britain, Germany, China, Malaysia, Japan and Australia will join the thousands of Kiwis in taking part on Sunday, with the age of participants ranging from 5 (in the Barfoot & Thompson Kids Marathon) to 89 years old.

While the five events take place on Sunday, athletes start arriving into the city late this week, with registration and the ASB Auckland Marathon Expo opening at The Cloud at 8am on Friday.

First away on Sunday is the pilot wheelchair marathon, with the gun going at 5:55am on Sunday morning on King Edward Parade in Devonport, with the first finishers expected over the line in Victoria Park in just under two hours.

Following on quickly from the wheelchair marathon event is the full ASB Marathon, starting at 6am from the same location, with elite athletes seeded to the front of the race. (Elite preview will be sent tomorrow to all media). The ASB Marathon course takes athletes from Devonport, to Smales Farm in Northcote, down the bus lane alongside the motorway, up and over the Auckland Harbour Bridge, along the waterfront to the turn around at St Heliers, and back to the finish line at Victoria Park.

The Barfoot & Thompson Half Marathon also starts in Devonport, at 6:50am, again with elites at the front of the field. The half is the largest of all the events, with over 6,000 runners and walkers taking part as they too head towards Smales Farm before turning and making their way towards and over the Auckland Harbour Bridge to the finish line at Victoria Park.

The John West 12km Traverse leaves from Smales Farm at 8:50am and is a straight(ish) drag down the motorway, over the Auckland Harbour Bridge and into the finish at Victoria Park, where the party and family and friends await all finishers.

The two events based solely on the city side of the Harbour are the Fitbit Family 5km (along the waterfront from Ngapipi to Victoria Park) and the Barfoot & Thompson Kid’s Marathon – a short 2.2km dash from Wynyard Quarter into Victoria Park.

Race Director Adam MacDonald says the buzz around town is amazing, with the record numbers a positive reflection on the event.

“The weekend is going to be so much fun, we have so many activations planned on the Sunday for all of our participants. This is more than a marathon, it is a celebration of Auckland and a chance for everyone, regardless of age or ability, to take part in one of the five events on offer.

“One of our slogans is ‘Run it Your Way’ and that is exactly what people are doing. From our pilot wheelchair event, to the Barfoot & Thompson Kid’s Marathon and every distance in between people are doing this for their own reasons, with friends, family or as a personal challenge.”

On-course activations for participants include cultural groups at key areas on course, ASB drummers, disco corner, and the Powerade Cart at Wynyard Quarter and a return of the bagpipes encouraging runners at Kelly Tarlton’s on Tamaki Drive.

Blitz the Bridge is back too, with the fastest male and female runners to get up and over the bridge recorded for each half hour of the race receiving a free entry to the 2019 event.

The event will again raise hundreds of thousands of dollars for charity, with ASB supporting the Charity Hero programme, encouraging runners to sign up to one of the official Charity Hero partner charities and do all they can to raise money for that cause. The total raised so far is close to the 800,000 dollar mark, leaving a wonderful legacy in the community long after the runners have left the bridge behind for another year.

An event of this size is a considerable exercise and cannot be run without the support of Auckland Council, ATEED, Auckland Transport, NZTA and the many stakeholders who contribute, not the least of which will be the 750 volunteers helping put on a show for all taking part and watching.

Auckland residents and businesses also play their part, with an understanding of the scope of the event and the necessary road closures, all of which are communicated in advance and mitigated to ensure the least disruption possible.

Other numbers of interest in the ASB Auckland Marathon: